San Ramon is a growing city of some 75,000 people, situated off Highway 680 in the San Francisco East Bay, around 30 miles east of San Francisco. It is very well-positioned for commuting to San Francisco, Oakland, San Jose and Silicon Valley.Increasingly though, residents are likely to work locally, many in the growing Bishop Ranch office park. This is a beautiful area surrounded by rolling hills, and activities here are limitless. There are hiking trails, biking trails, a theater, a movie theater, golf courses, a community college, and many parks. And that’s just for starters. Did I mention great schools, numerous restaurants at all price points and commutability?

Just like most of the Tri-Valley, San Ramon had its beginnings as a ranching and agricultural area, with rolling oak studded hills and spectacular valleys. It was settled in the late 1700’s, but it was the gold rush period that really put San Ramon on the map, thanks to a stage coach line that ran from the valley to Oakland. The Southern Pacific Railroad came to the valley in 1891, along what is now the iron horse trail.

Until the mid-1960s, San Ramon remained predominantly an agricultural and ranching hub, and then the completion of Interstate 680, connecting San Jose with Walnut Creek, resulted in suburban development.

One of the notable early settlers, Thomas Bishop, acquired 3000 acres of land in San Ramon. In 1978, this became Bishop Ranch, encompassing Bishop Ranch Business Park, home to Chevron Corporation, AT & T, Toyota, and U.P.S. to name a few. It was the development of Bishop Ranch that really shaped San Ramon, as large corporations moved operations from the more expensive San Francisco and Oakland marketplaces to the wide open spaces of San Ramon, bringing with them thousands of well paid employees. In 1983, the city finally incorporated, and officially became the city of San Ramon. 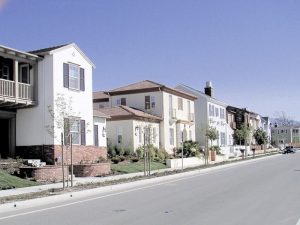 San Ramon neighborhoods are many and varied. The heart of San Ramon could reasonably be considered what is now the southern most part of the city – south of Bollinger Canyon Road, down to the border with Dublin.

The older homes on the south side tend to be smaller, although lot sizes can be quite generous by Bay Area standards. This is where the most affordable detached single family homes can be found. Moving further north, where most 1980s development was taking place, planned unit developments are more commonplace, and home sizes more generous.

Since the 1990s, most of the new development. has been on the east side of highway 680. Neighborhoods such as Canyon Lakes, Gale Ranch and Windemere are prime examples. Even now, there seems to be no end in sight of further housing development in Gale Ranch.

It’s not all detached single family home either. While they certainly account for the majority of homes here, there is everything from one bedroom condominiums to large estates in San Ramon. Even some farms and equestrian properties. San Ramon truly has something for everybody.

Education is a big motivator for most people moving to San Ramon, and with good reason. The San Ramon Valley United School District  is highly regarded, with many award-winning schools.

The city is served by two high schools, one, California High, serves residents in the 94583 zip code, while Dougherty Valley High, a much newer school, covers San Ramon 94582. Both schools have a great record of success.

In addition to the high schools, there are numerous elementary and middle schools, all of which are well-regarded. There really are no bad schools here.

For major shopping, it used to be that people would go to Walnut Creek’s Broadway Plaza, where there are numerous upscale and mid-scale shops. But now, San Ramon has its own upscale shopping center in Bishop Ranch where you will find stores like Pottery Barn and Williams Sonoma, as well as a state-of-the-art movie theater and an increasing number of interesting restaurants.

Additional shopping and entertainment options are spread throughout San Ramon. Worth Ranch and Gianni’s Italian Bistro are two restaurants worthy of note and for day to day needs, people living in San Ramon have plenty of options like Safeway, Whole Foods and Sprouts. Plus Trader Joe’s is only 10 minutes away in Danville. There are also farmers’ markets for those wanting fresh local and/or organic produce.

One question that will be probably on your mind if you are considering living in San Ramon is “What’s the weather like?” This can best be described as moderate. It’s warm during the summer months but it cools off in the evenings and it’s certainly nowhere near as hot as San Jose. It’s a great place to live if you enjoy relaxing outdoors. In the winter it’s like the rest of the Bay Area. Temperatures can fall below freezing on a really cold night and we do get quite a lot of rain most years. Sometimes we even see snow on the top of Mount Diablo!

Depending on your situation, commuting may not even be an issue, as not only is San Ramon an employment center in itself, due to the presence of Bishop Ranch Office park, but many other large companies have a presence in Dublin and Pleasanton, both of which are easily accessible. If, like many San Ramon residents, your commute entails traveling south though, you can anticipate a 45-60 minute drive to and from San Jose during peak hours. Many people who work there or elsewhere in Silicon Valley are willing to put up with the commute to be in our exceptional school district and to enjoy the great standard of living San Ramon offers. For those who work in San Francisco, the drive time can be similar, but many choose to take BART from Walnut Creeks or Dublin, rather than drive.

So to sum it all up, for so many people, living in San Ramon provides them with just the kind of lifestyle they want. The main reasons for people choosing to move here are our highly rated schools, relative affordability of homes, compared to other parts of the Bay Area, and the commutability to San Francisco and Silicon Valley. Once people move here, they quickly discover that living in San Ramon provides so much more than they had expected. This really is a great place to call your home!

Give me a call or just use this short form to contact us, and we’ll answer all your questions. We know San Ramon intimately, and around 80% of our real estate transactions, representing buyers or sellers, are in San Ramon. Ask us about San Ramon neighborhoods, schooling, employment, shopping, restaurants and anything else.

If you are in the area, let’s just arrange to meet for a coffee and you can pick our brains

We look forward to hearing from you.